Pamona The Poetic & The Practical 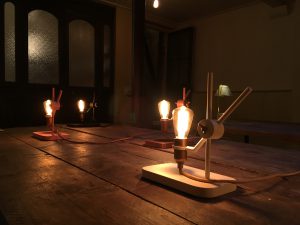 Photo by Marco Lehmbeck for Pamono

This month’s annual London Design Festival offered its usual, bubbly excitement, as the city buzzed from east to west with designers, galleries, brands, and curators presenting their latest and greatest. Amid all the playful energy, however, this year’s event felt a bit different from recent years: Set against the backdrop of our current political and cultural climate, timely topics—the yet-to-be-realized implications of the Brexit, the American presidential race, ongoing immigration and housing issues, quality of life questions, and more—were decidedly in the air, both in quietly murmured conversations and in the work on display.

The presentations were thoughtful and varied. From space-saving living solutions to esoteric installations symbolizing the passage of time, LDF was full of reflections on where we stand andwhere we may be heading. Across the board, designers’ responses to our current and future realities seemed to follow along two lovely threads: the poetic and the practical.

Read on for highlights.

Perhaps the clearest juxtaposition of these approaches was on view at Somerset House, which hosted London’s first ever Design Biennale. Following in the footsteps of other renowned global surveys, London’s inaugural Biennale brought together 30-some countries under the theme “Utopia by Design.” Inspired by Thomas More’s 500-year-old book Utopia, which imagined an ideal world in which social and gender equality were the norm and all citizens were involved in community building, the exhibitions ranged from logical to lyrical, broadly applicable to highly specific, and everything in between.

In response to their country’s impending digital revolution, Cuba’s Luis Ramírez and Michel Aguilar conceived Parawifi, a modular system of pods designed for public spaces that provide comfort and help establish new social practices in the country’s increasing WiFi hubs. Mexico’s digital Border City installation, designed by Fernando Romero, offered a detailed vision for a bi-national city on the border of the US and Mexico. And the UAE presented models for adapting Al Falaj, a native water irrigation system that once stretched across the Gulf region and could help meet the needs of the UAE’s ever globalizing cities.

On the more conceptual end, at the Austrian pavilion, mischer’traxler presented a dreamy, kinetic mobile called Level. Composed of a delicate network of rods and LED lights, the piece underscores the fragility of any utopia. As visitors move through the space, their breath combined with the air drafts of their movements cause the carefully balanced, interdependent rods to tilt and the lights to dim—commenting on the precarious nature of any ideal when subjected to the forces of everyday reality.

The Italian pavilion was similarly affecting. White Flag: Utopia as Surrender and Offeringbrought together 20 designers—including Antonio Aricò, CTRLZAK Studio, Matteo Cibic, and Cristina Celestino, among others—to consider the universal symbolism of the white flag. Each designer created a white flag to express the value of a truce. One flag was moved each day and one new object was brought in to take its place, reflecting the tenuousness of such agreements and the importance of concrete restitution for forward movement.

Arguably the most moving presentation of the Biennale was Benjamin Loyauté’s Le Bruit des Bonbons: The Astounding Eyes of Syria for the French pavilion. A marriage of the poetic and the practical, it consisted of a film installation and live experiment. The 18-minute movie—part documentary, part fiction—was shot in the Beqaa Valley refugee camp in Lebanon earlier this year; it captures bittersweet moments of refugee families, all nostalgic for simpler, peaceful times, sharing memories associated with sweets. Alongside the film, Loyauté installed a vending machine selling sachets of sculpted pink sugar candies called “Louloupti;” visitors could purchase the treats—conceived by Loyauté to evoke and share “immaterial memories that live through time and survive the tragedy of war.” Proceeds went to a charity supporting refugees and displaced children.

Over in Shoreditch, British architect Asif Khan’s Forests series also offered an opportunity for respite. Designed to give passers-by space for calm and connection amidst the hustle of urban life, the temporary, public installations consist of nearly transparent boxes filled with plant life. Conceived as a “third place”—an area that lies between work and home, public and private—they were inspired by the Japanese notion of “shinrin yoku,” or forest bathing, in which, according to Khan, “every sense switches to absorb the forest atmosphere: what you hear, what you smell, even the feeling underfoot.” 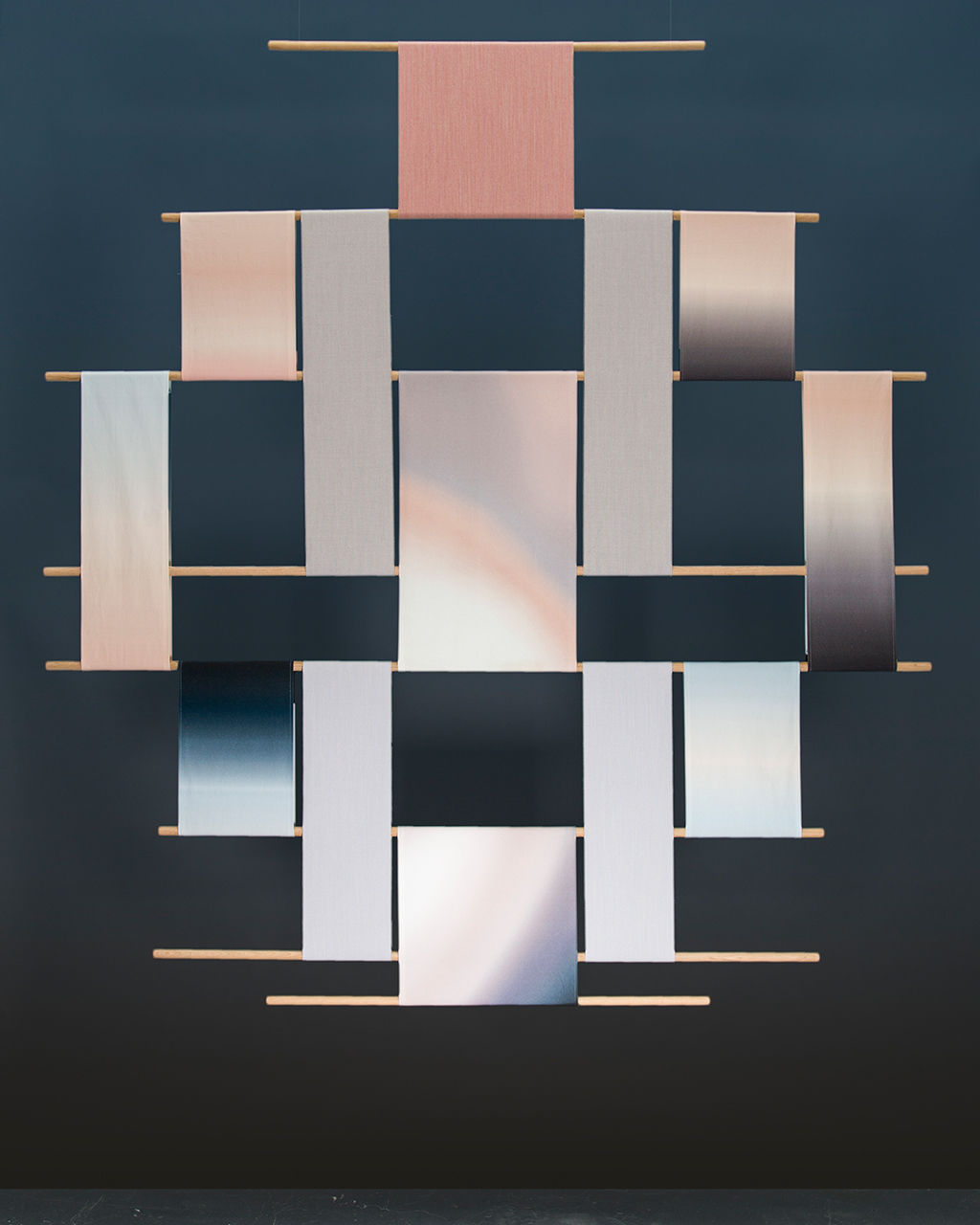 Rive Roshan’s Circadian Tapestry, part of the Electro Craft showImage courtesy of Rive RoshanAlso in the East, Dutch designer Tord Boontje’s Electro Craftconsidered “the craft of electronics and electronics made as craft.” Boontje curated new and existing works by 28 designers, ranging from commercial products to conceptual designs, from stereo speakers to wearable tails. Standouts include Marjan van Aubel’s how-did-she-do-that Dichroic Light, which morphs from a mirror to a light and changes color when viewed from different angles (achieved using polarized lights and circular dichroic spectroscopy); Rive Roshan’s multi-hued Circadian Tapestry, a kinetic piece that rotates slowly to symbolize the passage of time through a meditative and “chromological” (or colorful) approach; and Lina Patsiou’s new Eclipse Lights, inspired by “the beauty of sunlight as well as the contrast between light and shadow.”

Viaduct’s Bare Minimum presentation featured works by Muller Van Severen, Wonmin Park, Michael Anastassiades, and others, topped by the intriguing 13 SQM House by Studiomama. Asking “What do you really need to live?” the design duo developed their thoughtful, minimalistic interior scheme in response to shrinking urban spaces; it will ultimately be moved into an existing building in the heart of north London.

Over at 19 Greek Street, ethical living and sustainability were once again the name of the game. The gallery’s latest show, called Collector’s Club, “explores our connection with nature, with ourselves, and our surroundings” with eight days of design, art, books, meditation, and talks. On the gallery’s first floor, creative director Marc Péridis installed a pop-up shop and Design Café that celebrate his ongoing philosophy of “the sacred art of transformative spaces.” The rest of the five-story townhouse integrates pieces from 19 Greek Street’s ethically–driven design collection, curated by editor Rachael Moloney, as well as artworks from bo.lee gallery.

Finally, the spirit of collaboration and criticism—not always comfy bedfellows—were alive and well in two particularly intriguing shows: The first, No Ordinary Love: Martino Gamper w/Friends at the fabulous new SEEDS art-design space, gathered a group of designers and friends who had never worked together to create a collective-based project, resulting in a series of anonymously designed ceramic objects (prices doubled for any piece if you wished to know the specific maker). The show foregrounded questions such as “How do people collaborate?” and “With a collectively signed project, what happens to the authorship of designers who are already renowned and promoted by the market?”

The second, ABC, curated by the husband-and-wife team behind Study O Portable, presented the aftereffects of a design show—write ups, photographs, illustrations—that was mounted in Copenhagen at Etage Gallery. The overall impact honored the value of creative criticism and questioned the larger experience of art: What, for example, is the difference between seeing a piece in person and a piece in a photograph?  Or just reading a roundup review?

All in all, it was a richly layered festival. We were left feeling optimistic that, as the world continues to evolve, our best designers will also continue to respond in thoughtful, meaningful ways—asking the important questions along the way.